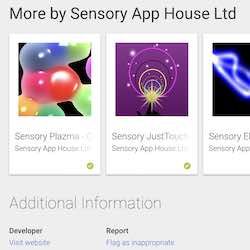 During May 2020 we have started a process to replace and extend our Sensory Apps on the Android Play store. This is so that versions of our incredibly popular iOS Sensory Apps can be enjoyed on Android tablets and phones. Also, the same version of these Sensory apps on Android will available for Chrombooks through the same Play store. The process will continue over the weeks ahead as we prepare each app for upload, and this will put us in a great position for when Google discontinue the Chrome Webstore Apps in the future. Read more about “Transitioning from Chrome Apps” here

Most of the Sensory Apps have been recreated as “Progressive Web Apps” which means we can serve them both directly into the Chrome browser or new Edge Browser for Windows. It also means we have been able wrap these Progressive Web Apps as “Trusted Web Apps” (with Google Family Friendly rating) so they can be downloaded from the Android Play Store to both an Android device or Chromebook. Creating Progressive Web Apps also allows us to add in new content and features going forward, and make that available to all users instantly.

Our first new submission of the app Sensory Electra has gone live today in the Android Play store. The older version has been withdrawn, but will still work for existing users who have downloaded it.

Sensory Electra is a simple, straightforward stimulating app for people with special/complex needs of all ages. It is visually stimulating and suitable for a range of abilities. Electra responds to taps and up to 3 finger simultaneous touch movements. Tap to change effect. Touch with 1, 2 or 3 fingers to (simulate) shock! You can also create neat lightning effects for screen capture.