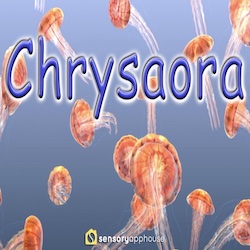 Many of the Sensory apps are designed for early visual engagement, tracking & vocal development for early learners with complex needs.

There are several ways Sensory Apps can help individuals with complex needs. For example, they can help with initial stimulation and engagement of the user.  Just to get their attention and focus. Many of the apps can help with early learning of cause and effect, sequencing, symmetry, …

In terms of visual skills the apps can help with basic awareness of a visual world (especially in a darkened room), localisation, foreground/background discrimination, tracking and engagement.

If the user can move their hands and works with a touch screen, the touch responsive apps can help with kinaesthetic awareness and development.

The new Sensory App House switch apps have been designed to help with the early steps in one and two switch usage. Most of the apps now include full support for the Microsoft Adaptive Controller. This access device was initially released for XBox, but now is supported by all main platforms and browsers, iOS, Chrome and Windows.

The digital painting apps are useful for basic creativity and exploration. These apps tend to feature a simple user interface to allow easy use.

The games are great for entertainment! We are switch enabling many classic and novel games so that the apps can run on many platforms and controlled by switches, keyboards, tap, adaptive controllers and mouse pointers.

Our Sensory apps that support voice input have been designed to support early vocalisations encouraging users to make different sounds (including frication and pitch). The  rewards are the responding visual shapes, strong colors and patterns and fun characters appearing.

We make live demonstration versions of most of our apps on this website, and the apps are free or low cost from the main app stores. Any feedback is welcomed as we always look to enhance the apps where possible, whilst avoiding over complicating for the user.